While working in CodeTrek from its initial phase, it brought me an opportunity to create a new system altogether. I started working in CodeTrek along with Adiba and Abhishek. When CodeTrek began to develop, I was only taking care of the coding part of development. But only coding the assigned tasks, was not sufficient.

Being the developer, it was important for me to develop the system by understanding it completely. When CodeTrek has just started to develop, understanding the whole system was a bit difficult for me. As the development progressed, I was getting a more clear idea of the workflow of the system. 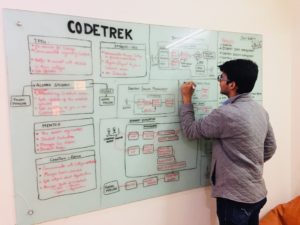 Yesterday, Prateek asked me to define the system workflow of CodeTrek. The exercise was to define all the entity relations in the features used in CodeTrek. I need to make a graphical representation to define the flow of the system. I made a structure and listed all the things which I knew technically. It was not the correct approach. Actually, the exercise was focussed to think about the problems we need to solve and how they are being solved. It was necessary to think from a normal person’s perspective, not technical. I started thinking from that perspective and came up with a structure.

After the structure was defined, I realized how easy it could be to understand the system. It is necessary to define a system in such a way so that anyone new can understand the system. I realized that how Adiba and Abhishek would have done that, by thinking from the ground level. The exercise really helped me to Know the CodeTrek system. Now I can say, that I know everything CodeTrek does.